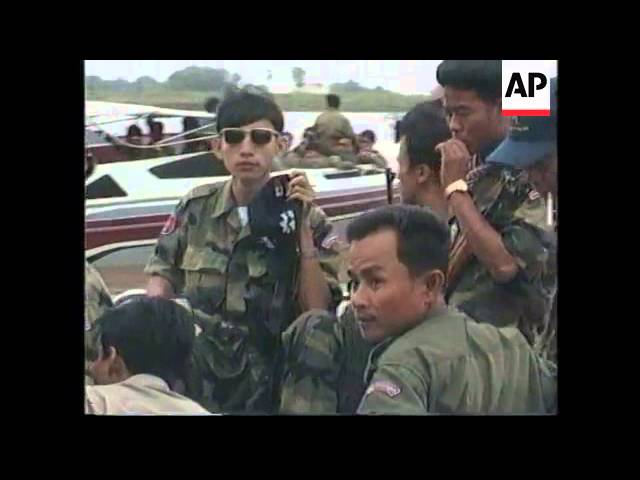 Cambodian police are cracking down on the rampant growing of marijuana.

Boat loads of armed officers have raided and destroyed flourishing plantations of the drug on a series of islands in the Mekong River.

The police have been threatening action for months – now the talking’s over.

About a hundred officers cut down more than ten hectares (25 acres) of marijuana plants on Anlong Chen island, about twenty kilometres (12 miles) south of Phnom Penh. It’s one of four islands in Kandal province that support substantial plantations.

Originally grown as a cooking ingredient, marijuana is now widely cultivated as a drug for the criminal underworld.

Police blame Thai drugs barons for funding the boom in production. The United States recently placed Cambodia on its list of major transit countries for narcotics, and urged the government to take action.

SOUNDBITE: (Khmer)
“The people thought their plants were far away, and
so secret that no one knew about them. We’ve joined together with
the local authorities and our police force to destroy it.”
SUPER CAPTION: General Yeng Mardi, Deputy Director General of Police

Young plants flourish in the hot, moist conditions. Poor farmers can get around two dollars per kilo – much better than the income from legitimate crops.

For this raid, the police came well-armed, and without warning – quickly crossing the short stretch of water. The farmers put up no resistance, and there was no reported violence, though at least one was distraught at the blow to her income.

SOUNDBITE: (Khmer) “I’m very angry they’re doing this, they’re destroying my plants. I don’t know how to stop them. What am I going to do now ? This is all I’ve produced for ages.”
SUPER CAPTION: Chan Sy, Marijuana farmer

This raid may have achieved its goal, but the problem is widespread. Cultivation is strongest in the southwest, close to the Thai border, where smuggling by sea and land is simple.

It’s doubtful how much of a dent has been put in Cambodia’s booming marijuana business.